Heirs of Cardolan as the LOTRO Ghostbusters
http://www.youtube.com/watch?v=XJuU0oOKPdE 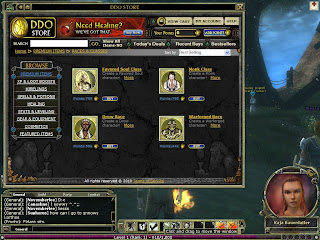 1) Be prepared for an experience unlike other MMOs...the lore prevents a lot of the glitz and glam of games like WoW. Remember...Its Tolkien's World, We Just Play in It,
2) Don't Rush. Lots of players are going to think they need to rush to end game to really enjoy this MMO and I'd warn them that by doing this they miss the point of this very story driven MMO.
3) Join a kin. Experience this game with the help of a kin will make it more enjoyable. (If you start a toon on Arkenstone check out Amistad Del Otro. I joined them over nine months ago and really enjoy it. They are at www.delotro.com)
4) Be RP Friendly. Even if you aren't a 'role player' lots of people in this game are.
5) Finally...don't be afraid to ask questions. This game is populated by lots of friendly people who will help you out if you ask.

The winner of the Backstory Contest is.........Devon's story about Stando of Landroval:

If you were to ask any Hobbit from the village of Staddle you might be
surprised to find them happy to share with you the location of their
best fishing spots. Indeed, they would smile when they told you that
the most wondrous fishing for miles around could only be found along
the western edge of the Midgewater Marsh. They would then chuckle as
they revealed that the fishing was certainly excellent, but only if
you could tolerate the nasty smelling fog and all the bothersome and
carnivorous bugs. No, the real secret known only to the locals was the
location of a small spot near the Swatmidge farm where the mist was
thin, the bugs small, and the fishing unusually good.

It was at that exact spot that a tired young Hobbit sat in the shade
of a small oak tree. He cast his line into the green, thick looking
water amid a steady din of buzzing insects. His day of fishing, which
had begun with such promise, had crawled along from a warm morning to
an uncomfortable mid-day heat. To make matters worse he was yet to
catch anything but a few sickly smelt.

My luck may yet change, Stando thought as he cast his line again into
the murky water. The irony of the thought left him frowning though.
Luck had been anything but good to him lately.

Frustrated, he pushed back his cap and scratched at his temple before
swatting at a gnat buzzing around his head. He paused and after a
moment let his hand stray to the deep scar that cut a jagged line
though his left eyebrow and across the empty socket where his eye
should have been. He touched the patch covering it carefully, still
unused to the feel of its leather surface upon his face.

For the hundredth time he wondered why he couldn’t have been content
to remain a simple farmer. No, he had to dream of being the greatest
cook from Staddle to Needlehole. He even secretly hoped that such a
famous cook might catch the notice of lovely Lily Underhill. She might
then stop to chat instead of just hurrying by with a quick wave and a
brief smile. To that end he stubbornly walked the path between Staddle
and Archet every day to work as a cook’s helper at the Mad Badger Inn.
Now, as he sat there with no fish on his line, he cursed himself for
such stupid, frivolous notions.

It was only a few weeks ago that he paused at the back door to spend
a few moments feeding kitchen scraps to a stray dog. That was when the
Blackwolds came with swords drawn and torches held high. Among them
had also been a few strangely robed figures from the far away wilds of
Angmar. It was one of these, with a fierce tattoo of a dark bird
across his face and ritual scars along his arms, which lead the group
that came upon him while he knelt at the back door.

The Angmarim gave a command and the bandits threw their torches at the
tavern and set its thatched roof alight with flame. Shocked by such
madness, Stando rose and called out for them to stop. The Angmarim
laughed at him and slashed through Stando’s face with his cruelly
curved blade. He stepped towards him to strike again but the stray dog
leapt to his defense. To the poor thing’s credit she did her best but
the Angmarim swung his sword around and he heard her yelp and whimper
in pain. Stando looked around to try and help the dog but the blood
from his face kept flowing into his eyes. He groped blindly in the
dirt but eventually the pain overwhelmed him.

In the days that followed his wound healed with the aid of a Ranger
who tended to many of the injured townsfolk. Despite his considerable
skill he was unable to save Stando’s eye as the damage had been too
great at the outset.

Stando lowered his head and closed the one eye that remained. He felt
it grow wet. It wasn’t fair to be marked like this. Who would ever
want a half-blind Hobbit? Not Lily, that’s for sure. The few times
they had seen each other she would look away and run off. He longed to
tell her what happened but in the end he decided it was best if he
left her be.

After that he had stayed away from Staddle. Rather than go home he
spent his time training with the Bree militia and helping with the
efforts to clear Archet of debris and the dead. He never discovered
what had happened to the dog. Later, when he went back to the ruin of
the inn there was no sign of her amongst the many blood stains and
burned timbers.

They buried those that fell in the town’s defense but for the
Blackwolds and their allies there was little pity felt for them. Their
corpses were heaped into piles near the banks of the Midgewater.
Stando checked each one but none were the Angmarim who had taken his
eye. When they finally lit the fires to burn the corpses he closed his
eye and for a moment he was back in Archet among the flaming
buildings. He saw the Angmarim’s laughing face and felt the slash of
his wicked blade all over again. He heard the brave growl of the stray
dog and her sudden painful yelp. He would never forget these. That he
vowed.

A tug on his fishing pole snapped him back to the present but he
didn’t even bother trying to pull it in. Instead he gripped the pole
like his spear and thought of driving the steel tip deep into that
Angmarim’s face over and over again. He knew these were not a Hobbit’s
thoughts.

No, he thought, these are the thoughts of Men and their ways. This is
what makes them want to fight each other and I am glad to have it. I
will find that Angmarim and have his eyes for what he did to me and to
the stray. I may be unwelcome among my folk now but I would guess that
brute’s people have even less use for a blind man.

Lily and the other Staddle folk were right to shy away from him. In
fact, he didn’t feel the need to fish any longer either. He wasn’t
that hungry, not really, and he could make good time today if he
stopped wasting it here trying to be what he wasn’t anymore.

He stood and wrapped his fishing rod in an oiled cloth. He fixed it to
his pack along with his shield and slung both over his back. He had
heard a rumor that a Ranger near the Forsaken Inn might have
information about these Angmarim. That would be as good a place to
start as any. He knew it would be a hard march though the marsh, but
testing the weight of his spear in his hand he felt resolved to
dispatch whatever crossed his path.

It was time to move on.

Other backstories that you can find online:

RannaDylin and her backstory for Linett Redfern (see also the continuing story in her other entries)
http://my.lotro.com/rannadylin/2010/01/24/have-you-seen-grace-redfern/

Hope to see you all in middle earth.

Instead of starting a new podcast (Casual Stroll to LOTROCast or Green LOTROCast Inn) I thought I'd setup up shop in a similar but slightly different location. You can now visit the blog at http://www.lotrocast.net/ or http://www.thelotrocast.blogspot.com/ and you can send emails to thelotrocast@gmail.com.

In more news, Turbine has announced that LOTRO will be going F2P (Free to Play) this Fall. See the link here for more details.

Here is an article on the F2P from MMORPG